One of the most popular events before the start of “March Madness” is the Big 12 men’s basketball tournament. The 2016 Big 12 Tournament will begin on Wednesday, March 13th in Kansas City, Missouri. The championship game will take place on March 16th. Fans wanting to track action can do so with a Big 12 tournament bracket sheet. The sheet is free and can be downloaded instantly below.

While wildly popular, the Big 12 tournament has only been in existence since 1997. Under the current format, the top six seeds earn first-round byes in the single-elimination tournament. The inaugural event took place in Kansas City, Missouri. Tournament Most Valuable Player and future NBA star Paul Pierce led the top-seeded Kansas Jayhawks in an 87-60 rout of Missouri in the first-ever championship game. Kansas would go on to win the first three Big 12 tournaments. 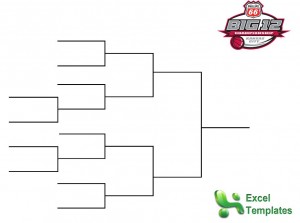 The Jayhawks have dominated the Big 12 tournament, winning eight of the nine championship games they have appeared in and posting a 30-7 overall record. All of the other schools in the conference have combined to win it eight times, with Oklahoma alone in second place on the all-time list with three titles.

The Big 12 also introduced the women’s version of the tournament in 1997. Colorado clocked Kansas State, 54-44, in the first championship game in Kansas City. Baylor and Oklahoma have collected four tournament titles apiece. Baylor has won the last two and three out of the last four tournaments. The winners of both the men’s and women’s tournaments receive an automatic bid to the NCAA Tournament.