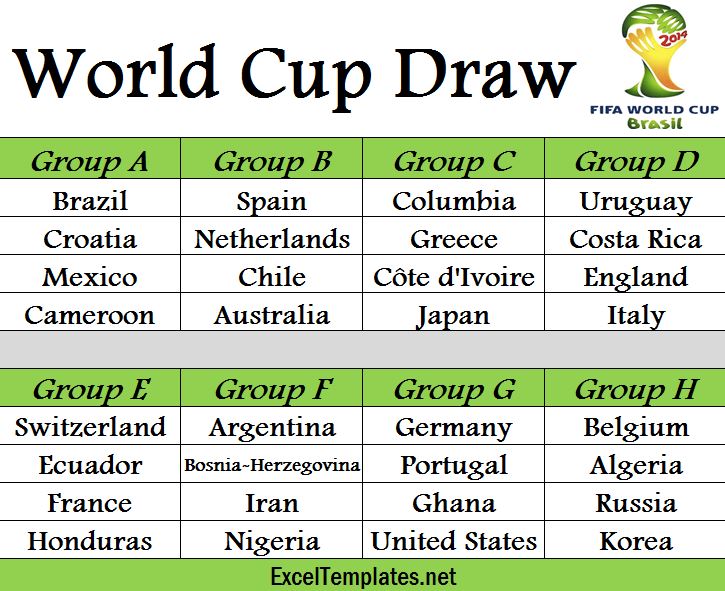 Brazil will be the host nation for the 2014 World Cup this summer. The largest international football tournament in the world will begin on June 12th and will conclude when a champion is crowned at the conclusion of the 2014 World Cup Final on July 13th.

A total of 32 nations reached the final eight groups that make up the 2014 World Cup draw. You can see all the groupings with a complimentary 2014 World Cup sheet. You can download and print the World Cup 2014 draw sheet absolutely free by clicking the link located on this page.

Facts about the 2014 World Cup

The 20th installment of the World Cup will be returning to South America for the first time since 1978. This year, Brazil will become only the fifth country to have hosted the international soccer extravaganza two times.

Brazil has had more success in the tournament than any other nation in World Cup history. Brazil enters the 2014 World Cup with a record five title. The Brazilians have also finished as runner up on two previous occasions, and have placed third two additional times. Brazil is also the only country to have qualified for all of the World Cup events.

Italy ranks second on the all-time list with four titles, while Germany sits alone in third place with three. Argentina and Uruguay have picked up two titles apiece. The United States has had nearly no success in previous tournaments. The Americans enter the 2014 World Cup with just one top-4 finish, which came all the way back in 1930.

The defending champion entering the 2014 World Cup is Spain, which notched a 1-0 win over the Netherlands in the last tournament in 2010. Over 3.1-million fans attended the 64 matches in 2010. The average attendance for each match was just under 50,000 fans.