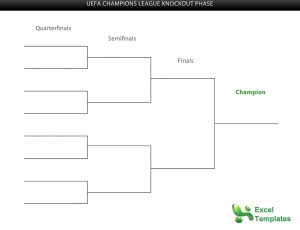 Since 1955, the UEFA Champions League has annually pitted the best football clubs across Europe against one another. Easily the most prestigious of all the football events in Europe, it is also one of the most revered in the entire world. In 2009, the final match surpassed the Super Bowl as the most watched sporting event in the world. In 2011, the final contest was watched by more than 178-million people worldwide. For football fans everywhere, a UEFA Champions League 2013 knockout phase sheet is available right here. The sheet is instantly downloadable and completely complementary.

The 2013 Champions League marks the 58th year of the tournament. No club has claimed more championships than Real Madrid, which has taken the title nine times. Real won the first five tournaments and has appeared in the final 12 times overall. A.C. Milan has been victorious in seven of its 11 final appearances, with its last win coming in 2007.

The UEFA Champions League Final will take place on May 25th at Wembley Stadium in London. Wembley Stadium has been the site of the tournament final on six previous occasions. The club that wins the final in 2013 will net over $16,000,000 just for being victorious in the match. The runner-up in the final will take home just under $10,000,000.