Sudoku is one of the most widely-played puzzle games in the entire world. While it has surged in popularity in the last decade, the story of Sudoku actually began decades ago. Printable Sudoku sheets make it possible to play the game anywhere in the world. Whether it’s at work, school, the airport or the local park, the wildly popular game can always be at your fingertips thanks to these printable sheets. Sudoku printable sheets are instantly downloadable compliments of this site.

Sudoku is a logic-based, number-placement puzzle game. The board consists of a 9×9 puzzle grid of nine 3×3 regions. Ever column, row and region has nine cells each. The game starts with a partially-completed grid and the objective is to refrain from using the same number twice in any row or column of the puzzle.

The first versions of number puzzle games began appearing in French newspapers near the end of the 19th century. These games resembled the current Sudoku board, but did not require logic to solve. These “Magic Square” puzzles appeared in newspapers on a weekly basis until World War I. 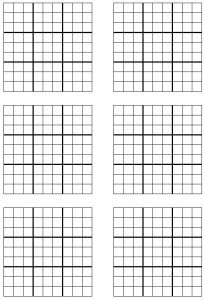 It’s believed that the modern version of the game was created by a freelance puzzle constructor from Connersville, Indiana named Howard Garns. Originally called “Number Place,” the game was published by Dell Magazines in 1979. The Japanese puzzle company “Nikoli” is responsible for naming the game Sudoku and making it popular in 1986. Garns, who was an architect in Indianapolis, Indiana, passed away at the age of 84  in 1989.

Sudoku, which means single number, exploded in popularity in the 2000s. The first American newspaper to publish a Sudoku puzzle was the “The Conway Daily Sun” in New Hampshire in 2004. Television game shows based around Sudoku began appearing in England in 2005.

Meanwhile, an annual international competition for the game was created in 2006. The first-ever World Sudoku Championship took place in Italy that year. Jana Tylova of the Czech Republic was crowned the first World Sudoku champion. American Thomas Snyder and Poland’s Jan Mrozwoski have won the event three times apiece. The tournament began featured a team competition in 2007. Japan won the first in ’07 and was victorious again in 2012.

There are several different variations of the original Sudoku game. Some of them include:

While printable Sudoku is considered to be among the most popular forms of the game, the digital age has led to the creation of Sudoku software. The game is now playable on computer, websites, video game consoles and mobile telephones.