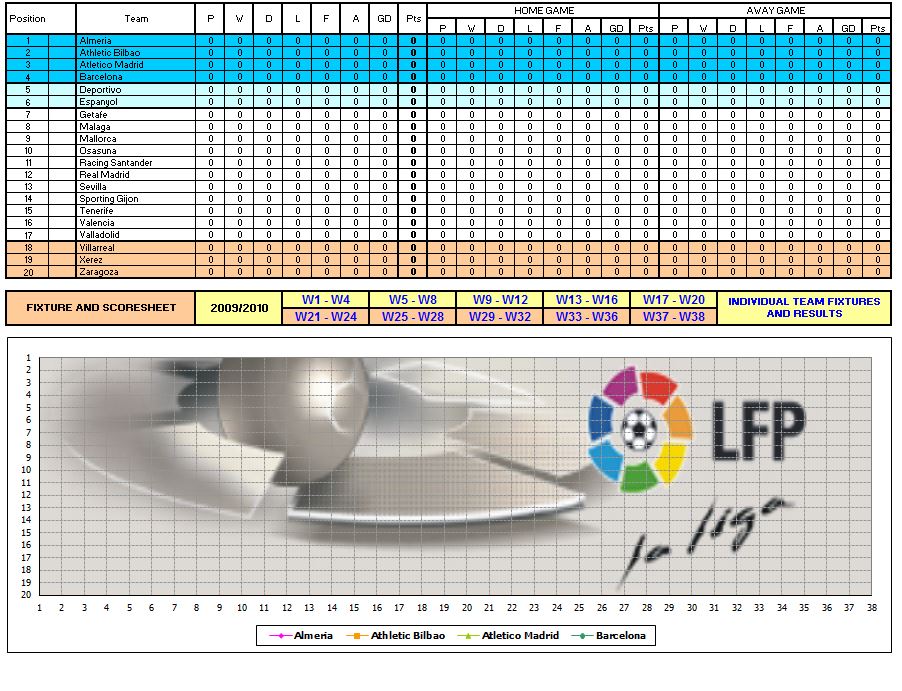 With the Spanish La Liga fixtures template, you will be able to take a look at the updated league table, see what the upcoming fixtures are, analyze the performances of the top four clubs, and look at the weekly performance charts of every team in the division.

When you have completed the download of the Spanish La Liga fixtures template, you can open it through Microsoft Excel. The file automatically updates through your internet connection, giving you updated league tables, fixture timings, results, goalscoring statistics, and form guides.

The great thing about this Excel template is the amount of time it can save you. Instead of having to go through various websites for information on La Liga, you can simply open the template every day to see what is going on. Want to know when your team is playing? Want to know how the last round of games turned out? Simply look on the home screen of the Spanish La Liga fixtures template for the information you need.

Most soccer experts consider La Liga to be one of the top three leagues in the world, along with the Italian Serie A and the English Premier League. The top two teams from La Liga are Real Madrid and Barcelona; considered by many to be the top two teams in the world. La Liga is often a two horse race between these two great sides. However, there have been upset years, when the likes of Atletico Madrid and Valencia have claimed the La Liga title.

La Liga is home to some of the best players in the world. Cristiano Ronaldo, Lionel Messi, Andres Iniesta, Mesut Ozil, and Xavi Hernandez all ply their trade in Spain. Four out of the last Ballon d’Or (Footballer of the Year) award winners have come from La Liga, while 10 out of 11 players on FIFA’s 2012 Team of the Year were from La Liga. If you are a soccer fan, you will want to keep up with La Liga. Use the Spanish La Liga fixtures template to do just that.