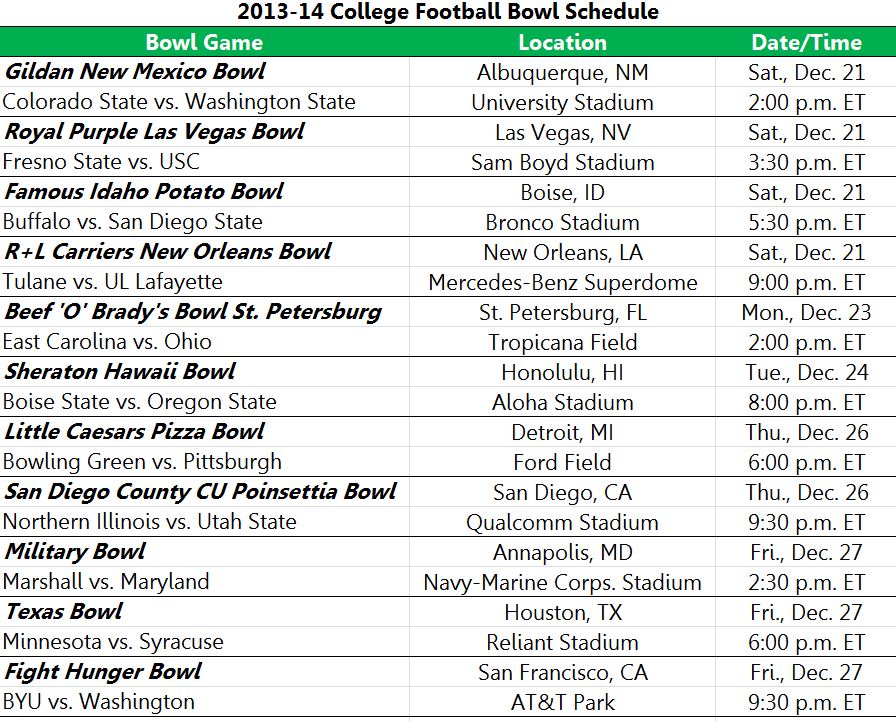 The 2013-14 college football bowl schedule features a total of 35 games. The slate opens up with Washington State clashing with Colorado State on the 21st. Later in the day, the USC Trojans will lock horns with the Fresno State Bulldogs in the Las Vegas Bowl.

There’s only one game on the college football bowl schedule on Christmas Eve, as the Boise State Broncos will battle the Oregon State Beavers in the Hawaii Bowl. The bowl season continues the day after Christmas, as Pitt will meet Bowling Green in the Little Caesars Pizza Bowl, while Utah State will square off with Northern Illinois in the Poinsettia Bowl.

Four games will be played on New Year’s Eve, with the headliner being Johnny Manziel and Texas A&M taking on Duke in the Chick-fil-A Bowl. The game will likely be the last of Manziel’s college career.

The college football bowl schedule features six games on New Year’s Day. The BCS schedule also begins on the 1st when Michigan State and Stanford hook up in the 100th installment of the Rose Bowl. In the evening, Big 12 champion Baylor will collide with UCF.

In other BCS bowls, Alabama will face Oklahoma in the Sugar Bowl on the 2nd, while Clemson will go against Ohio State in the Orange Bowl on the 3rd.

In the main event of the 2013-14 college bowl schedule, undefeated Florida State will face Auburn in the final BCS National Championship game.